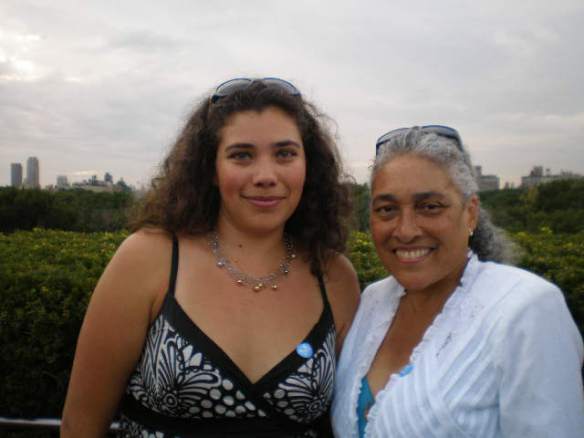 I was born into a mixed race family living in a traditionally white neighbourhood of Vancouver in the late 70s.  However it was not until I was in the early grades of elementary school that I noticed, or rather it was pointed out to me, that I looked “different” from my mother.  On schooldays, my next door neighbour Toby and his friend Brook, who lived down the block, were dropped off to my house in the morning and my father would walk us to school. This one morning, as we were leaving, Toby looked at Brook, who is black, then at me and asked why Brook looked more like my mother than I did.  I looked at Brook and didn’t understand – Brook didn’t look like my mom.  But the question lingered.  When I told my mother this strange thing Toby had said she explained that Toby was noticing that she and Brook both had dark skin.  This is my first memory of race; the first time I was aware that our family was in ways different from those living in our neighbourhood. What this realization marked was not just the point at which I became aware of race, but also the beginning of a misplaced belief that I was somehow different from my mother.

In an attempt to bridge this perceived difference I came to identify more closely to my mother’s family than that of my father’s, and in doing so came to think of my self as part Jamaican.  That “part” allowing my inclusion in my mother’s identity.  Jamaican and Black became mistakenly fused in my early notions of what it was to be Jamaican, primarily because my mother’s family, her siblings and their children were all darker than I.  It was not until I had a broader first had experience of the cultural and racial diversity of Jamaica that I realized I was not “part” Jamaican, but rather I was both Jamaican and Canadian; that being Jamaican and being black were separate from each other.

In my teens I began to notice that when I told people I was part Jamaican or that my mother was Jamaican they tended to project stereotypes on me.  I encountered statements such as “You like the ganja?” and “Bob Marley, mon.”  I also found that people viewed Jamaican’s, and thus my family, as aimlessly lounging around beaches, smoking ganja, and drinking rum while listening to reggae music.  These views were so vastly different from my experiences of Jamaica that I became hesitant to share my heritage with people.

Though I now openly and proudly identify myself as Jamaican, I am still cautious of people’s reactions.   I do not smoke marijuana.  I do not think Bob Marley embodies all that is Jamaican.  I have passed though my twenties and begun my thirties without having children. I am Jamaican but I will not be a stereotype.

Like many post-colonial countries Jamaica is struggling but there is great strength in its people and culture.

In 2007 I received my Jamaican citizenship. There no longer is any “part”, I am both Jamaican and Canadian.

6 thoughts on “I am Jamaican”